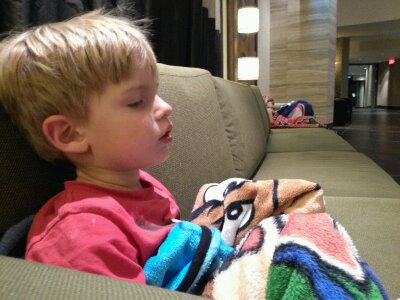 Because Air Canada couldn’t get their plane to SFO on time, then ate into their cushion with weird passenger disembarkation delays before we were even allowed to board, we missed our red eye connection to Montreal. Air Canada thoughtfully “rebooked” the four of us as standby passengers on a 9am flight, which it seems unlikely we’ll get on, or be able to sit together on, but which we would kick ourselves for missing if we didn’t try to make. Even if we do make it, we’ll burn all of tomorrow getting to Kingston. So Air Canada’s 40 minute delay is going to cost me 9 hours of time with my family. To put the icing on the cake, they “booked” us at a hotel in Vancouver for the night that was oversold, so we were shuttled over to its sister property, where the kids eventually passed out in the lobby. The upside: the kids were amazing on the flight to Vancouver, so the flight tomorrow across the country might not be terrible, even though they won’t be asleep, as we had planned. See you in 5 hours.

(Update #1: Nope, they did not get us on the first flight. Not even close. So we woke up at 6:30, after getting to the hotel at midnight, to sit at the airport. That’s two gambles with Air Canada that have not paid off. Oh, and ha! Because we had a car reservation at our destination with a company that closes its airport location at 5pm (we won’t be doing that again), and there’s no way in hell Air Canada will get us to our destination by 5pm. So then I had to call both the rental location and Expedia, both of whom claimed I needed to call the other to cancel. To which I am all: Is it weird to be grateful that there is so much real misery in the world so that my little inconveniences remain inconveniences to my mind instead of tragedies? Is perspective the upside to global suffering?)

(Update #2: The second flight we have standby seats for (standby! For a family of four! This is never going to happen.) is , to quote the agent from last night, generally oversold, but also prone to having seats available last-minute because…people miss the connection quite frequently. So I have to hope for someone else’s misfortune just in order to get to my destination about 15 hours late.)

6 thoughts on “Midnight: Stranded In Vancouver”