Erin is a born daredevil. When she was a baby, she would commando-crawl to the edge of her play spaces, finding doors and staircases leading to new worlds. She was so fast as a commando she never really bothered crawling upright. She passed quickly from crawling to running, and then the world was her oyster.

Honestly, carrying her in the backpack was partly inspired by how much trouble she could get into if she were let loose.

Now, my little commando is five, and doorways and staircases are boring. Now she flips, spins, cartwheels, somersaults, climbs, and swings her way around the world. When she talks about kindergarten, it is to tell me how many rungs she can skip on the monkey bars (two now); when I pick her up, she always wants a few more minutes to hang upside-down from her knees on the climbing structure.

Someone introduced her to the idea of handstands in the last week, and my little freerunner would not be satisfied until she had mastered whatever combination of muscles and balance is required to perform that feat. 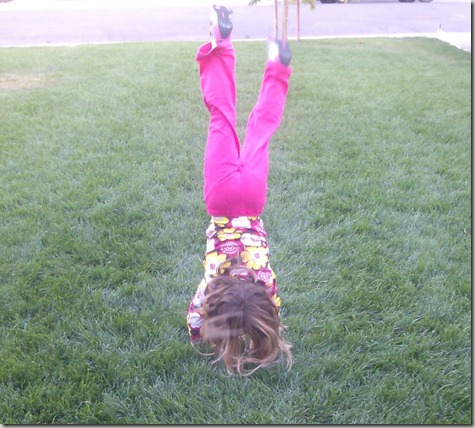 She practiced out on the lawn, over and over, for over thirty minutes. Popping up, falling over, popping up again. She worked out a complicated system of nods, winks, headshakes, and claps with me so that she could know immediately how closely she had come to getting completely vertical, paused, before falling over. And she succeeded.

On that day, her longest hold was about half a second. So short it could barely be called a handstand at all; more like falling over very slowly. But today, at the mall playpit, she just rolled on up into a full handstand like it was nothing. She paused there at the top for two or three seconds, then repeated the maneuver a couple of more times before I started fearing she would kick someone in the head on the way up or down.

When we returned home from our daytrip, she was out on the lawn again, practicing her moves. Her shoulders already look more developed than just a few days ago. That’s ridiculous; it must be self-deception. And yet, my little girl can pop herself up into a handstand.

She realized she could do something else this week, too. So let me leave you with this, dear readers.

Look out, American Ninja Warrior. Your 2025 Champion is already training.

7 thoughts on “Freerunning for Five-Year Olds: Trading Patty-cake for Parkour”