I bought my first music album in 1988. I was eleven years old. I’d never had a reason to buy music before. Music was either on the radio, or scattered on tapes throughout family cars. I remember sitting in my parents’ car listening to their Queen and Huey Lewis & The News tapes over and over again. I remember riding in my grandfather’s car, listening to The Eagles. I remember calling in to the local radio station to request songs, or to dedicate songs, and then sitting there, waiting for the song to be played. But the first time I ever paid money for music was in 1988. It was Def Leppard’s “Hysteria”, and I bought it because I was in a lip-synching competition at school. I had decided (after the radio played the song over and over) that I would lip-synch “Pour Some Sugar On Me” with my friends as my backup band. I bought the tape, and listened to it ceaselessly for days, working on my moves, getting the lyrics wrong (I still get the lyrics wrong), and deciding on an outfit. (I went with a jean jacket. Jean jackets are cool.) Eventually the day came, we performed, and we lost to the group that performed George Michael’s “Faith”. I’m still upset about that. 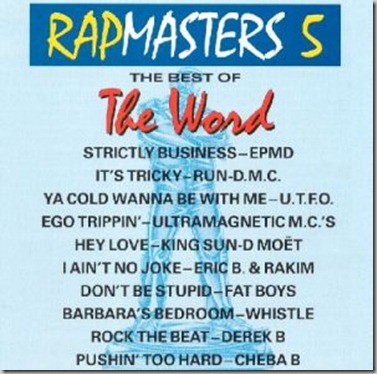 I know exactly why I bought it. I had seen Run D.M.C.’s “It’s Tricky” video (featuring Penn & Teller; do you remember that?) a bunch of times, and heard the Fat Boys’ “Wipeout” all over the place. I was browsing around a cassette carousel at K-Mart and a bunch of these Rapmasters tapes were on it. I saw “Run D.M.C.” and “Fat Boys” and thought that was enough of a reason. I could have spent money on a Bon Jovi album, or Guns N’ Roses, or U2. But no, I needed Rapmasters. Rapmasters 5.

Although I had heard “It’s Tricky” (and “Walk This Way”) before, I had never heard anything like the sound of most of the songs on this tape. This wasn’t rock-backed stuff, like Run D.M.C. or The Beastie Boys seemed to offer. It was all swaying beats; head-nodding, grooving. It was personal narration, not songs about stuff. I wore the tape out.

The next year, both Vanilla Ice and M.C. Hammer released their huge albums. I bought both of those albums, but I don’t remember any songs except the hits from them. I remember all of the songs from Rapmasters 5.

I remembered that tape tonight, and of course I had to track down videos for those songs. As soon as E.P.M.D.’s “Strictly Business” started up, I was eleven again, spouting lyrics I had no business saying.

I was this kid:

My parents must have heard the music I was listening to. We didn’t have Walkmans, or even headphones in the house. I played my tape on a portable tape deck (I called it a ghetto blaster, but that’s because I didn’t know any better), and I played it all the time. If my parents ever said anything about the music I was listening to, I have no memory of it. I don’t know if they cared. I don’t know if this tape annoyed them.

I wonder, though, because of what Erin has started dragging home with her. After attending some summer camp sessions, and essentially being entertained by teenagers for two weeks. she came home with “Call Me Maybe” stuck in her head, and it’s been there for a month. I know that I’m all done with that song, and its lyrics are pretty tame for kids to hear. What must my parents have thought of Erik B. and Rakim?

I’ve had “I like to slam it when I’m done and make sure it’s broke” in my head for over twenty years. That’s a hell of an earworm.

The only lesson here is that listening to music, even being fully invested in music, will not dictate who your children become. There is so much more to them than a vessel to be filled with lyrics. I ended up being able to appreciate U.T.F.O and E.P.M.D., but they didn’t turn me into someone my parents wouldn’t recognize as being part of them. I still love Queen and Huey Lewis, and I will listen to The Eagles while I’m driving and think of my grandfather.