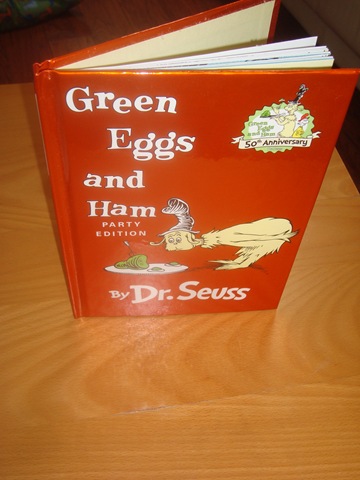 Erin read Green Eggs and Ham to me tonight. Right to me. She read it all.

I lay on the bed with her as she puzzled out the sounds. “G…got? Is it long-o or short-o? I think it’s long-o. Goat.”

Erin came home from kindergarten two days ago intent on practicing her reading. It’s not something we’ve pushed very hard on her: We taught her the alphabet early on, and how to sign letters, then how to recognize letters and the sounds they made. She wrote her name during Christmas vacation a couple of years ago, and she always asks us to spell words out for her to write down.

As I write that list now, I reconsider: maybe we did push it a little. But the most work I’ve done with her on actually reading words came during a couple of Go Dog, Go sessions a few months ago. She figured out ‘dog’, and ‘go’, and ‘big’ and some other words. I could have kept at her, but life was life, and I stopped trying to teach her after a few days. I didn’t try to impart any rules of reading to her; I just asked her what sounds the letters made individually, then encouraged her to pronounce them together quickly, until there were no breaks. When this trick worked, her eyes would light up as she recognized a word she knew coming from her own mouth unexpectedly.

Although we gave her more of a foundation than it seemed, at first, it still wasn’t anything like a nightly reading program, or some kind of preschool regimen. It was just occasional emphasis on paying attention to the sounds letters make. We approached her with encouragement when she expressed interest, and generally ignored it when she didn’t.

But Erin does as Erin does. She decided, this week, that she was going to learn to read. So she came home from kindergarten on Wednesday afternoon, desperate to get her hands on her copy of Green Eggs and Ham. She sat down at the kitchen table, and for the hour between the time she came home and the time Emily came home, she had worked through several pages. She asked for my help with some words, and I would always ask her what the letters said. When she got stuck on words, I’d give her a rule (“If there’s an ‘E’ at the end of the word, it makes the ‘A, E, I, O, or U’ long. If there’s an ‘A, E, I, O, or U” next to an ‘A, E, I, O, or U’ it makes it long, and that’s all the work it does…”), and she’d carry that rule with her further into the book. (It is at this point that I realize that we inexplicably pronounce “here” and “there” differently. Anarchists, all of us.)

By the time Emily came home, Erin could read a few pages, smoothly, though it seemed she was allowing her memory of how the book goes to influence her choices. (She also loves the Moxy Fruvous song version, which complicates things, since it’s not completely faithful to the book.) The next day, she thought about the book all day. Could she practice when we got home? Would I help her? When I reprimanded her for something she did during her music class, the thing she was most worried about was that I wouldn’t let her read when we got home. “I will always let you read,” I assured her. She read pages with Emily at bedtime, and she was working out the words instead of relying on memory.

Tonight, we had some friends over, and Erin insisted that she read Green Eggs and Ham to their youngest. Erin sat in her comfy green chair with a preschooler at her feet, and she read and read. At bedtime, I lay down beside her, and let her sound out the words. She read to me.

She read to me.

She made mistakes, and I would let her know when that happened. They were mostly in places where she was guessing at a word instead of sounding it out, so the solution was easy. Sometimes, as with “goat”, she wasn’t sure what to do with the sounds, so I’d remind her of the rules. “They” also caused a problem, since it defied the rule about long-e. Some words we just have to remember. “Could” and “Would” just had to be memorized, because they aren’t pronounced in any way resembling a rule she can follow.

As each page inched by, after she read each “I will not eat them” monologue, Erin grew more excited, knowing she was going farther than she ever had before. She knew I was there to help, but she knew she was doing the work. And when she reached the end, she looked up at me with a huge smile, and I clung to her. I could see into the future in a way I’d never done before, and the future was filled with books, and books, and books.