Oh, hey there blog readers. I feel as if it’s been a while since I wrote anything here. I’m not going to check. It feels like weeks. It’s probably days. Here, have a picture of me and Suzy Singh from MasterChef Season 1. 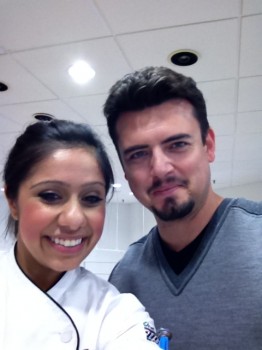 So, about three minutes ago, I asked Twitter to write my blog for me.

I don't want to write on my blog. You write on it. Tell me what to write, Twitter.

@BackpackingDad Write about the time you broke the sound barrier when you jumped…no, wait…pumpkin spice lattes. They're popular.

Well, here’s what I have to say about pumpkin spice lattes: I hate them. Oh, it’s not the pumpkin spice of it all: I don’t like lattes. I don’t like most coffee (read: all coffee). I actually added black coffee with cinnamon to my diet at the beginning of the year for about six weeks, replacing Pepsi Max with it. I noticed a little help in the weight loss department, but not enough to keep drinking coffee. I genuinely don’t like the taste. And if you tell me that the problem was that it was black instead of sweetened, well, you’re just telling me that what you like about coffee isn’t, in fact, coffee. And I agree: coffee is gross.

Well, allow me to WOW! you. Tonight’s dinner was blue box mac ‘n cheese for Emily and the kids, and Chipotle takeout for me. Everyone has been sick lately, and despite having gone grocery shopping on Friday, it seemed like there was no food in the house tonight. Also, with Emily feeling sore throat-y, I didn’t want to make something that required a lot of work to eat. So, mac ‘n cheese it was.

However, I perked it up a bit, in a manner that I am dubbing “White Collar Trash”. What is White Collar Trash, you ask? Well, it’s when you take a traditionally cheap or trashy element of your life, and pretend like it isn’t by adding snobby suburban touches. For instance, the White Collar Trash version of mac ‘n cheese includes shelled edamame. Whee! So classy! Other examples might include: drinking PBR from a schooner glass, or using Dutch Crunch bread for bologna sandwiches.