Erin and Adrian were invited to a bowling birthday party this weekend. They had never been bowling before. 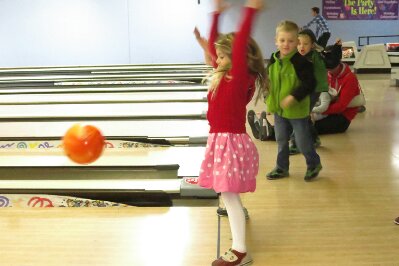 When I was Erin’s age, my father would take me bowling. It was one of the few regular activities I can remember him being present for. During those early years, the army years, he was away a lot. But he was around for bowling lessons.

I used to have four bowling trophies. Each one was inscribed with “I Beat My Coach”. My coach was my own father, so I’m not sure how hard he was trying. He liked to tie me in games and races and contests. I didn’t like to do things I was bad at, I guess. (I lost all enthusiasm for ice skating lessons when I started late, and saw the toddlers who could skate rings around me.) I used to think I was a pretty amazing bowler. That’s probably not a good thing, in retrospect. I am not an amazing bowler. There’s a comedy in there somewhere, about the kid who got too much praise, going on the pro bowler tour.

Erin is definitely not a good bowler. But of course, she’s only done it once. Adrian is even worse: he was a little hesitant to even push the ball. It’s okay to see my kids as not great at something, isn’t it? I don’t have to give them trophies, do I?

Maybe a trophy for cuteness. 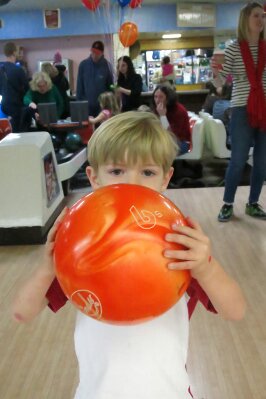 When we got home from the bowling alley, Emily put together a makeshift lane in the hallway with toilet paper rolls and a superball. 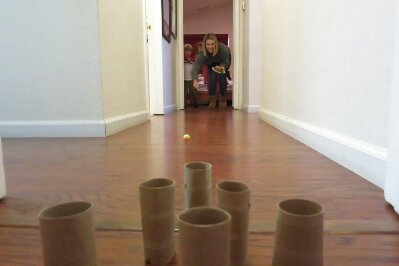 The bowling will continue. When they beat me, I’ll definitely give them a trophy.