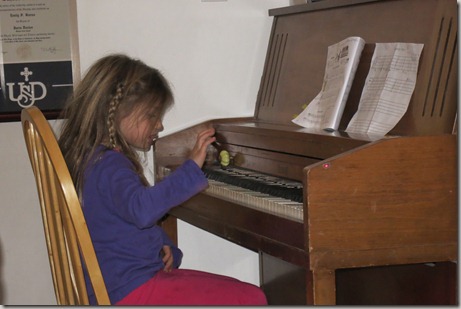 We started Erin in private piano and music classes when the school year started. The music class, a computer-based group lesson that involved putting shapes on a screen and printing off pages to take home and throw away, proved a total waste of time. It was supposed to, I think, introduce young children to the idea of music having visual representations that can be manipulated and turned into different sounds in orchestration. What it did, instead, was encourage the kids to do four seconds of object placements, then try to flag the teacher down to print their music sheet. Erin was bored, I was bored (I couldn’t sit in the class with her, but nor could I leave the music school grounds, so I spent 40 minutes each week sitting out in the hallway, with an equally bored Adrian), and by the end of the session she couldn’t do anything that she couldn’t already do much better on our computer at home (or with an iPad). It was almost like the teacher was an obstacle to the computer program, instead of using the program to facilitate a lesson. We did not re-register for the new session.

Erin’s piano lessons have proven to be a different challenge. She is never bored. She loves performing, and getting music right, and showing the teacher what she can do. She loves learning, and with the music book she is using for her lessons she actually learns things like what notes are called, and how long to hold them based on their representation. No, Erin’s obstacle in her piano lessons is me.

Erin has instructions from her teacher to practice every day, and to do a certain number of exercises and worksheets to accompany her sight-reading. This requires, however, that I remind her to practice, and remind her to do her worksheets; and I am the worst person in the world to keep anyone else on top of their homework. Some weeks are better than others; but some weeks are one day long, short cram sessions to squeeze a week’s worth of knowledge into her head the night before her lesson. When your father is a procrastinator, you might be doomed to procrastinate too.

Compounding my sin, I have the impatience only someone who is himself a somewhat frustrated musician can have when his progeny refuse to turn prodigy. Of the two parents in the house, I’m the one with the most music training, so I work with Erin on her lessons. I refuse to accept that she can’t recognize the B below middle-C on the staff: It’s right there! Look at it! Just, I don’t know, count one down from middle-C. I will not tolerate Erin telling me “I can’t do it” or “It’s too hard”, reading into her pleas a malingering ploy rather than what is probably the truth: she is not getting enough practice.

The last-minute cram sessions are frustrating for the both of us, and I’m starting to realize that it’s almost all my fault. Sure, Erin exaggerates her short-comings for sympathetic effect; I did the same thing when I was younger. And older. And probably recently. But I’m the one who turns into a crazy person because my daughter keeps trying to play middle-C with her index finger instead of her thumb. It’s pressure I’ve put on myself by letting her go without practice; by being worried that she’s not going to get all her learning done by the time the next lesson comes around; by being worried about her failing. I’m imparting all of that anxiety to her. I can feel myself doing it.

I don’t think I should hold her to soft standards. But I do recognize that I’m the source of many of the things that are frustrating about our piano time. I don’t want her to strive for perfection at the cost of being good. That’s a flaw in my own being, and if there’s something I don’t want her to emulate in me, it’s that.

But still: middle-C is right there, kid, so that one is A. Look at the music, not at your fingers! You’re slowing down. You call that a half-note? Drop and give me twenty scales!

All of that over an instrument I can’t even play myself. Heaven help her when she asks me to teach her how to play the guitar.

14 thoughts on “Confessions of a Reluctant Tiger Dad: Piano Lessons”