I didn’t expect to meet anybody, much less this anybody. As it turned out, I spent a lot of time in San Diego with “just be cool, man” running through my head as I encountered person after person I didn’t expect to meet. Circumstance and personal connections conspired to bring these encounters about, and I’m still reeling from it all. These are the flights of fancy we have when we go to Comic-Con. Sometimes they are something more. Thus, on Friday night, I met Joss Whedon.

I was invited to a party at Zachary Levi’s Nerd HQ on Friday night. I mean, I wasn’t invited; I was the guest of someone who was invited. Of course I wasn’t invited. But I was there. I spent the night dancing in shoes that were not made to be so used, on legs and feet that were not trained to be so abused, and I didn’t feel a thing. “Just be cool, man. Just be cool.” My mantra kept me distracted. 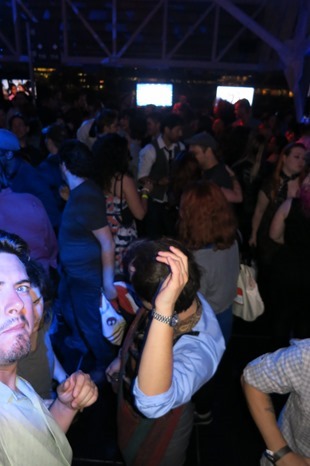 This is the only picture I took at the Nerd HQ party on Friday. “Pics or it never happened,” yes, I know. However, I was not about to be that guy. No matter how much I wanted so very much to be exactly that guy.

I was standing by a small side table off the dance floor checking my phone (Why? What was so important on my phone right then? Get back to the dance floor, dummy!) when Joss Whedon walked past me on his way back to the crowd of dancers. “Just be cool, man. JUST BE COOL. JUST BE COOOOOOOOL!!!!” I tried to push the geek way deep down inside.

A little bit of it came back up. “Hi Joss,” I tossed to him as he walked by. Then I turned my head away, like that was it. Because that’s what a cool person would do. Right? But he stopped and looked at me with a slightly puzzled expression on his face, like he was trying to remember who I was. “Oh, no, it’s okay,” I apologized, “you don’t know me. I’m Shawn. I just wanted to thank you for making things that I love.”

I shook his hand as I made my introduction, and he smiled (maybe) and said “Thank you” (maybe), and then we ended the moment and went our separate ways. I actually don’t remember very clearly at all what he did or said. Isn’t that strange? All I can remember is that my thoughts were racing, and I just wanted to stay cool. He could have said “Oh, Shawn, I love your tweets!” and I wouldn’t remember it. I’m pretty sure he didn’t say that, but he could have.

Later, I danced near Joss for a good part of the evening; not by design, but because I was dancing with a friend who planted herself over there with people she knew. I doubt I would have had the nerve on my own. And because of that geographical accident, when Joss squeezed by someone to leave the floor for a minute, he squeezed by me.

And as Joss Whedon squeezed by me on the dance floor at Nerd HQ, he mimed playing with my boobs for a second. And then he was gone. If the evening hadn’t involved sweaty dancing for four hours, I would have vowed to never wash my chest again. Instead, I totally took a shower later.

Now, some of you might be wondering “But Shawn, that’s a story about Joss Whedon getting to second base with you, not you getting to second base with him,” and you’d be absolutely right. It was later in the evening, when I was feeling emboldened by my now close, personal friendship with my new best friend Joss Whedon, that I returned the favour. I mimed playing with his boobs, then I turned my head away like that was it.

Because that’s what a cool person would do. Right?