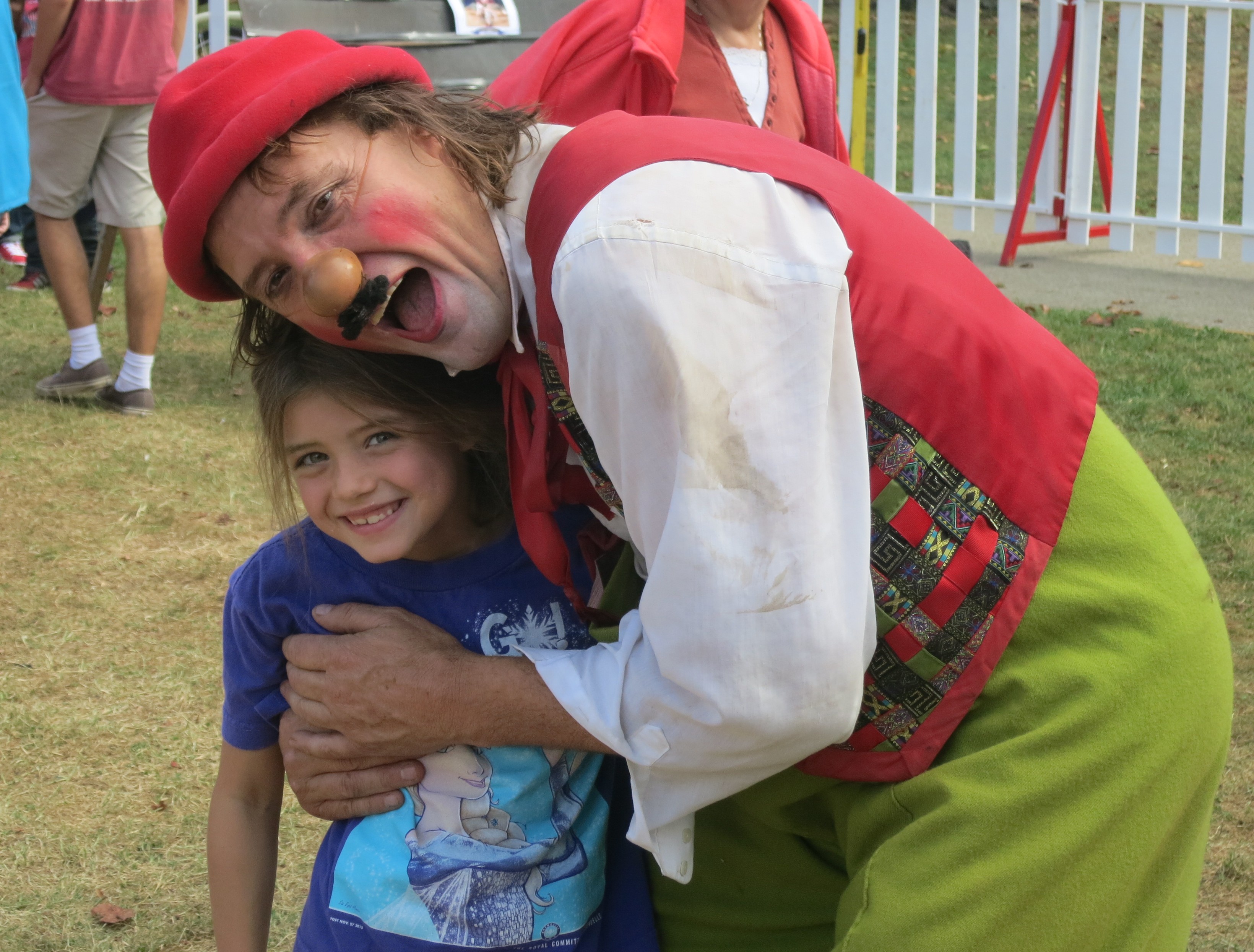 The circus came to town, so the town went to the circus.

The Zoppe Family Circus stops by Redwood City every year, and even though we no longer live very close by, we’ve still gone every year for the last few years.

It’s a fun little single-tent affair, an old family circus full of acrobats and clowns. “We’re not French dancers calling ourselves a circus,” is a familiar line from the pre-show.

The show begins with a welcome from the matriarch of the Zoppe family, who invites us to revisit the past. The the performers gather in the ring to symbolically take their props from a battered trunk.

Nino the clown does some clowning between acts to get the crowd into the show. Occasionally, he will go into the crowd, which is both a lot of fun and a way to distract the audience from the people in the ring who are transitioning equipment and getting ready to perform.

Today I joined the circus. Nino selected members of the audience to come help him. A group of (mostly) large men lined up while he mimed examining us for strength or flab.

Then, we grabbed a large rope on the ground and held it taught in a tug-of-war pose while Nino balanced on top of it.

Nino had lots of interactions with the crowd, and with his “boss”, the severe and somber white-faced clown.

There were jugglers, and trained dogs, an act involving the Boss standing astride two giant horses while they ran around the ring, a woman leaping and twirling from the back of another horse, and acrobatics of all kinds.

The Zoppe Family Circus is a traveling circus. They go all over the U.S., coming back to the Bay Area every year. When we were in Arizona over New Year’s last year, they were there as well, so we saw them on New Year’s Eve. We really love this circus. As it turns out, the circus loves us too! Well, it loves Erin.

You see, one of the acrobats, Carlo, was one of Erin’s teachers at circus camp over the summer a couple of years ago. We had no idea, until Erin started talking to him. We thought nothing of Erin talking to an acrobat. This is what she does: treats performers like she’s known them for years. Well, in this case that turns out to be pure truth. Of course she knows an acrobat at the circus. Of course. This child lives a magical life full of Disney princesses who parade her around the park, and circus performers who teach her how to spin plates and do clowning routines.

As the show ended, the performers ceremoniously returned their props to the trunk, then lined up to thank the crowd for coming.

Because it’s such a small space, with a manageable crowd, the performers exited the tent and then greeted everyone on the way out, talking to any kids who wanted to say hi, or anyone else, for that matter. One elderly lady, who was celebrating her birthday, asked her daughter to get Nino to take a birthday picture with her. It was adorable.

And Erin got one more circus hug. We’re sure it won’t be her last. Watching her eyes brighten up as the acrobats flipped through the air, I’m not sure we won’t be lining up to take pictures with her at the circus in a few years.