“Come to Greece,” my friends said, “we’re getting married.” 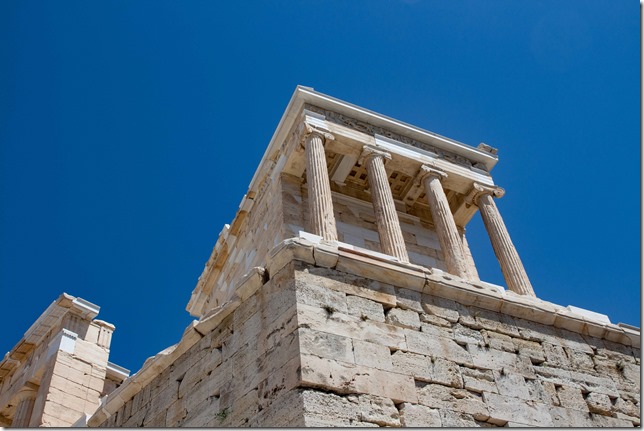 There are worse reasons to travel across the sea than to attend a wedding. The Greeks did it once because of a wedding too, though their reason was less celebratory than ours, and involved more horses. An even better reason was in the offing, however. “We’d like you to marry us.”

You don’t say no to this if it is at all possible to say yes, so I said yes.

“Kids, we’re going to Greece.” How do you sell the idea of Greece to children? Stories work wonders. Erin, through a friend and her Goddess Girls books, was well on her way to a more-than-passing interest in Greek mythology. She knew names like Zeus, Hera, Poseidon, Athena. She was an easy sell. Adrian presented more of a challenge.

But yo, turns out we have a secret weapon. One of my favourite books, a book my own parents had read before I was born, and then I had read when I was old enough to tackle 375 pages on my own, was about a young boy growing up during the Trojan War: Whom The Gods Would Destroy, by Richard Powell. I took my copy down from my shelf and started reading it to Adrian, a few pages each night, for a couple of months. He learned about Achilles and Hector (and discovered why a family pet was named what he was named), Priam and Paris (and discovered why a French city was named what it was named), Helen and Hermione (and discovered why a young witch was named what she was named). He wondered about Bronze Age armor, and if any museums in Athens would have a set like the Dendra Panoply so he could see what Achilles might have been wearing. He learned about the Golden Apple, and Paris choosing Aphrodite over Athena and Hera. He learned that Poseidon was also called the Earth Shaker. 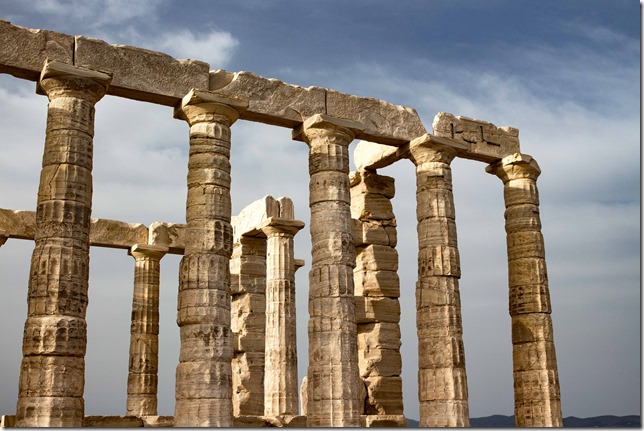 We spent a week in Sounio, a town south of Athens right on the Aegean, where Helen and Paris would have passed by on their way to Troy, leaving Helen’s daughter Hermione behind in Laconia. The Temple of Poseidon still stands on a hilltop overlooking the bay, and that was where my friends wanted to have their wedding. So that’s what we did. 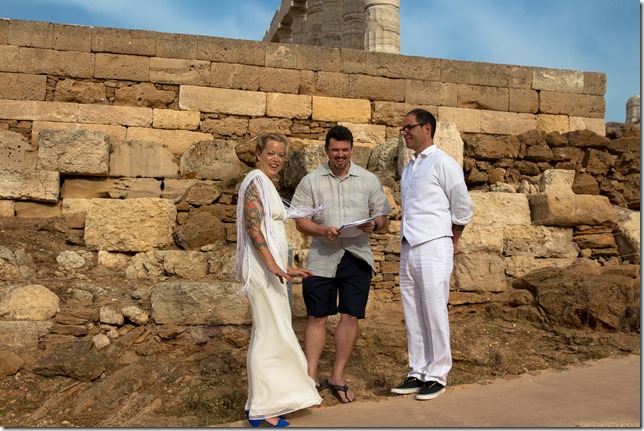 From Greece and its Hermione we flew to England, where another waited. 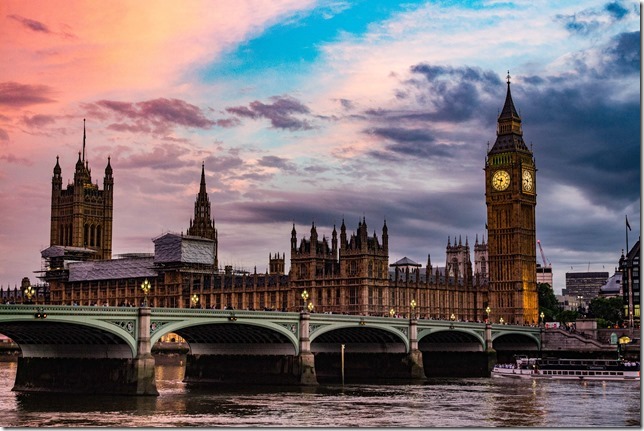 We spent days wandering the city, and meeting up with friends (one of my oldest friends lives in the city; Erin’s oldest friend happened to be there at the same time). We were there for the start of Wimbledon, and the Brexit vote, a West End show and the crown jewels.

Both Erin and Adrian love Harry Potter, but Erin…Erin has been method-acting as Hermione for some time. Her accent is getting pretty good, and at the end of the school year I had, on more than one occasion, to remove excess books from her arms, props she wished to carry with her to feel more like Hermione Granger (“Grane-jah”). She is enraptured.

Erin fantasized about meeting J.K. Rowling, or scoring tickets to the (not-yet-performed) play, Harry Potter and the Cursed Child. Such encounters were not meant to be. 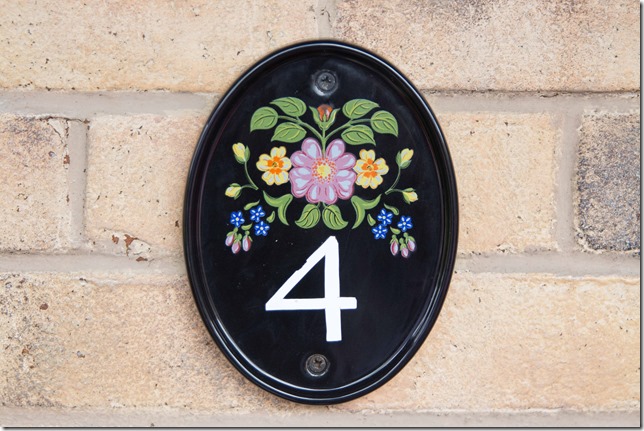 But yo, turns out we have a secret weapon. The Warner Bros. studio where the films were, well, filmed is a short train ride outside of London. 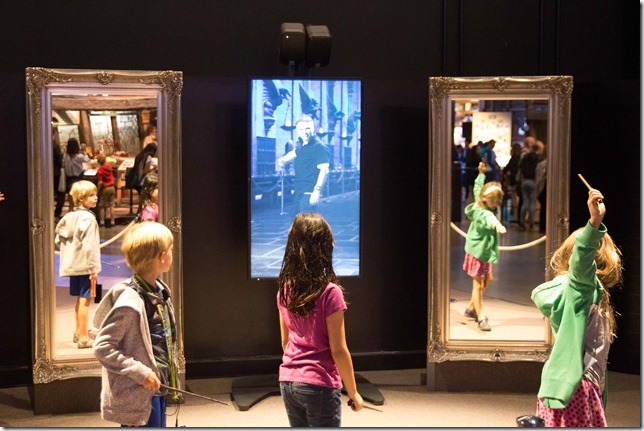 From England and its Hermione we took a train to Paris, where another awaited. 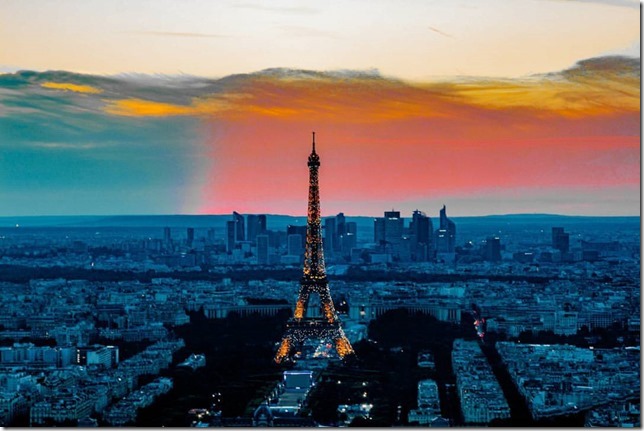 We spent days eating croissants and crepes, butter and cheese flying everywhere. We saw the Mona Lisa and Disneyland Paris, the Eiffel Tower and an exhibit on furniture design. We were there for the Euro 2016, Canada Day, the Fourth of July, and my own birthday. That day coincided with another event, happening in New York: Lin-Manuel Miranda’s last performance in Hamilton, a show whose protagonist-antagonist meeting is deliberately modeled after Harry Potter meeting Draco Malfoy.

I mention this because at the same time the kids were discovering Greek mythology and the Wizarding World, we were all, as a family, growing obsessed with Hamilton and it just so happened that our trip involved Independence Day (the day, not the movie) and we were thinking a lot about Alexander Hamilton and the American Revolution and the kids’ favourite character from the show…

Yo, turns out we have a secret weapon.

An immigrant you know and love

Who’s unafraid to step in.

Everyone give it up for America’s favorite fightin’ Frenchman!

Lafayette, who sailed across the sea on his ship, the Hermione, to fight a war far from his home, is buried in Paris, in American soil from Bunker Hill. Every year, around the Fourth of July, in a private military ceremony at Picpus Cemetery, a new American flag is raised where Lafayette lies. It is the one day of the year the cemetery is closed to the public. 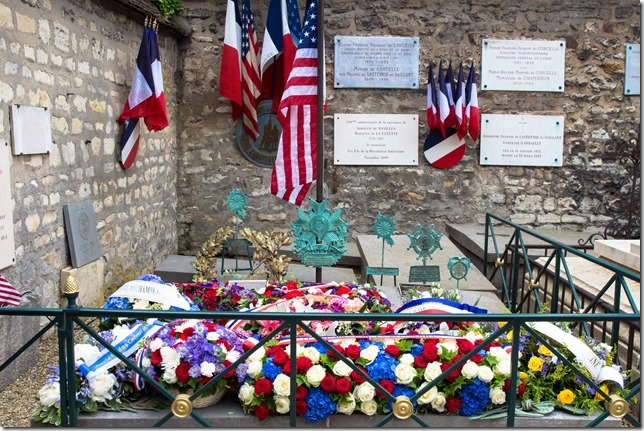 But yo, turns out we have a secret weapon. Did you know you can just email the U.S. State Department? That’s true! And they might even email you back. With their help, I contacted the Sons of the American Revolution, who host the flag ceremony, and asked if maybe a traveling American family might pay their respects to Lafayette on this day and…

Erin stood next to the Ambassador to France during the ceremony, with a better view than anyone. 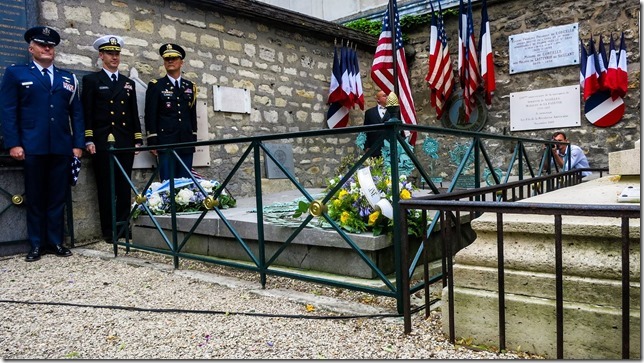 From Paris and its Hermione we flew back home, where the events of the month would settle somehow, turning into memories, and then, if they were good enough, into stories.