It looks like a tie between Nathan Fillion and Alyson Hannigan.

Wait, no, one of YOU won the coffeemaker. They’re just the ones who got the most votes for “Favourite Joss Whedon Alum”.

Although there were 50-something attempted entries in the contest I had to throw out a bunch of them for “not giving a crap” reasons. That is, although the first rule of the contest said to leave a comment naming your favourite alum, some of you thought that part didn’t matter and you could just leave a comment and get an entry.

No. You can’t. Seriously, twenty seconds on Google and you’d not only have discovered the awesome world of Joss Whedon, but figured out how much of an influence he’s been on the television world you live in now. And you’d have been entered to win a cyborg coffeemaker.

However, there were also some people who were confused about what I was after when I said “alumnus/alumna” and gave me the names of characters instead of actors. These entries I kept, because while “not giving a crap” is the fault of the commenter, being confused about the meanings of words is at least partly the fault of the writer. Me. I’m the writer. See? That could have been confusing too.

(But come on. Alumnus? You don’t know what alumnus….no…nevermind. That’s mean. I shouldn’t do that.)

So, in the end the total number of valid entries was 40.

Random.org produced a sequence in 5 columns with the winner being…. 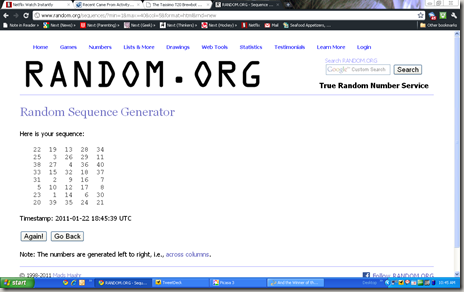 Wait a second while I count…

Everyone should go yell at her for winning because you are all super jealous now.

4 thoughts on “And the Winner of the Cyborg Coffeemaker Contest Is…..”