I like to take pictures of things. I am not good at it. The first camera Emily and I owned together was purchased in 2000 for a trip to Europe. It used that newfangled Advanced Photo System film instead of the old rolls-in-tubs kind. We bought twenty rolls of Kodak Advantix film, usually with numbers like “200” or “400” on the side, and headed out. The result of me having access to twenty rolls of film and my own camera for the first time in my life were…unimpressive. That was the trip of the Blurry Bus Photos: pictures taken of things like mountains and windmills and funny European houses and the Eiffel tower, all from the comfort of my Contiki bus seat.

My camera had an utterly basic zoom feature, and the option to shoot in small, medium, or (for the insane photographer), Landscape. The Landscape photos were the length of my forearm, when developed, and were pretty expensive, so I made sure to waste a lot of film on them as I played with my new camera.

I love the photos from that trip, but not because they’re any good. They’re about as bad as photos get. But they were taken sincerely, and even a little selectively, especially toward the end of rolls as I realized I was running out of shots. But oh, what would I do if I could go back in time with some rudimentary photography knowledge and a camera with some basic controls for things like “aperture” and “shutter speed”. 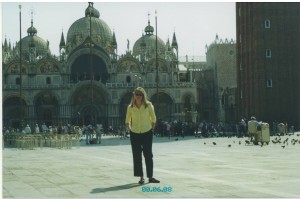 I actually didn’t really understand those terms, or what ISO meant, until last night.

I’ve been getting really annoyed with how boring my pictures look, lately. Since the kids were born we’ve only owned digital cameras, point-and-shoot Cybershots or Nikons that can slip into my pocket. My camera actually has a whole bunch of different options on it to control things like focus points, metering, and even, yes “aperture” to a very, very limited degree. It has a button on the dial labeled “ISO”. But I had no idea what to do with any of these options.

When I look at the pictures I take of the kids, or on vacations, some of them come out great and I want to keep them forever, and some of them come out miserably, and if my kids weren’t in them, and if they weren’t the only pictures I had of the kids visiting a certain place or doing a certain thing, I’d delete them in a heartbeat. Having a digital camera has, in a way, made me a worse photographer than I was with my crappy APS camera in 2000. I don’t even try to get the picture just right before I snap, because I have unlimited space to store bad photos. I take twelve bad pictures, then I get one that is kind of okay, and I move on. But I don’t do any adjusting to settings or take the environment or light into consideration before I snap: I just look at the image on the screen and wait until someone is looking at me.

Last night I resolved to really start learning something about photography. I’m not going to go buy a new camera just so I can get some crazy new lenses and get that shutter speed that goes “click-click-click-click” when you see a professional photographer taking multiple pictures. But I want to be able to make pictures look as good as they can with the rather expensive (compared to the $90 camera I bought in 2000) camera I have here: A Sony Cybershot DSC-W120.

I mentioned my problems on Twitter, and immediately received a link to Karen Walrond’s blog post, from that very day, on aperture, shutter speed, and ISO. I learned some very basic, and world-warping, things reading it: aperture can affect how much detail comes from objects in the background of your subject (the one you are focused on); shutter speed freezes objects, or lets them flow (which I kind of knew already), and that the range of shutter speeds is enormous; and finally, that ISO is easily remembered as thinking about little dudes in a dark room grabbing whatever light comes in: The higher the ISO, the more little dudes there are.

I also remembered seeing Peter West Carey (@pwcarey on Twitter), mention over and over and over again that he was doing a 31 Days to Better Photography series this month. Peter has guest-posted for me here before, and he’s the kind of insane adventuring photographer that I wish I seemed like I was when I show off my vacation pictures. Then I could say, “Okay, now here’s Erin and a frickin’ lion. I know it looks like she’s in the lion’s lap, but seriously I’m just really really good at photography. It’s knowing how your camera works. This is a combination of ISO, shutter speed, and aperture I like to call “Terrible Father”. It’s good, right?” I clicked over to Peter’s series and started reading, getting even more in depth about aperture, shutter speed, ISO, and the Exposure Triangle. Or, as Peter explains them: The Exposure Teeter-Totters of Doom. Peter also includes many pictures of bunnies and drawings of yetis. It’s helpful.

Both Peter and Karen write for those of you who have a decent camera, but the principles they talk about are applicable even to my little Cybershot. I can adjust my aperture slightly (though I end up zooming when I do this, so I have to step back to get my subject back to the size I really want it to be), and my camera will try to, based on the metering of light in the frame, a central area, or a point, adjust the shutter speed so that based on the aperture I’ve chosen, and the ISO I’ve selected (also customizable), the exposure itself will be properly lit. This means, for me, that I can actually take pictures that are lit correctly even though I am adjusting other things in order to change the way the images look.

Sort of. It’s an aspiration, I suppose.

I took a bunch of pictures of my cat last night, all from what I hoped was the same focal distance, with different aperture settings. The camera adjusted the shutter speed to accommodate, and I manually flipped through different ISO settings. About all I can say is: even with the camera as customizable as I set it to be, a cat just looks like a cat. 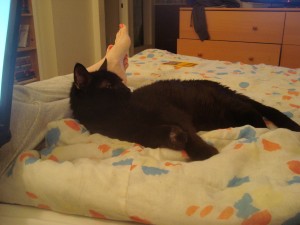 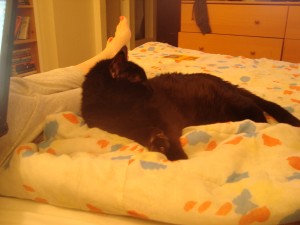 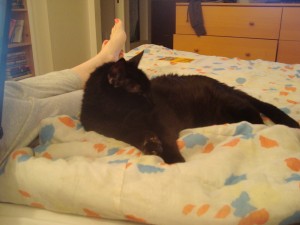 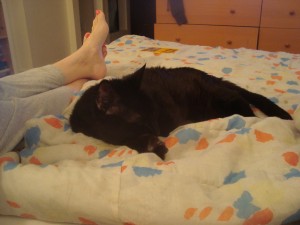 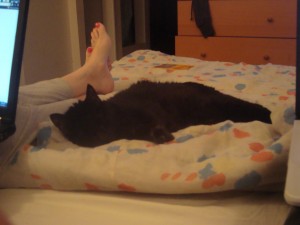 I don’t know what the hell I’m doing.

So, the reason these pictures all look, pretty much, the same to me (beyond a slight colouration difference) is that I wasn’t trying to capture anything with the changed settings. Narrow aperture helps keep staggered objects in focus together, but lets less light in, which is compensated for in the lighting of the exposure by either manually adjusting the ISO, which I did in several shots. Or, if the ISO is not changed, the camera will slow down the shutter to let more light into the frame. However…I wasn’t staggering anything in the focus. I was just taking pictures of my same damned cat. He was the only subject I cared about.

So, I guess what I’m saying is…I know a little bit more about photography than I did yesterday. But I’m not better at actually taking pictures. Apart from the Exposure Teeter-Totters of Doom knowledge I now have thanks to Karen and Peter, I still lack things like: knowledge of light, staging, and common sense.

I’m going to keep trying though. I can’t afford a $900 camera that I would only use, really, to easily take the same pictures I could take with this old camera with a little knowledge and practice. If I’m ever going to buy a better camera I need to use it as an upgrade, not a shortcut.