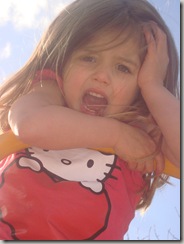 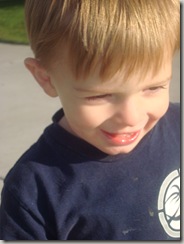 Both of those pictures were taken in broad daylight, with the kids moving a little, but not very fast, and after I’d been practicing with my camera for nearly a thousand shots to get a feel for it. The results were not great, but I could put them in a photo album.

I’m a little better at this now. It’s been hundreds more shots later, and I’ve figured out a new wrinkle about my camera: I can change the shutter speed dramatically by turning the flash on. It’s kind of a trick: I make the camera think I’m shedding a ton of light into the frame, it meters the frame, notes that it’s broad daylight, and speeds up the shutter to let way less light in than it thinks is going to be in the picture. However, I’m not really letting that much light in, because I also back way the hell up, and zoom in. The result is a very fast (for this camera) shutter speed, without a flash-glare off the kids’ faces, which would have happened if I’d been standing close in front to get them the same size as they are in this zoomed setup. With a faster shutter speed I get more sharp edges to the kids, and less saturation than I was getting with the shots in broad daylight before. 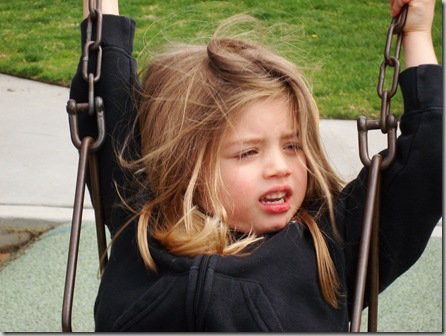 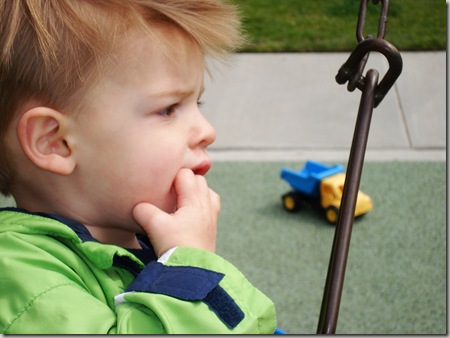 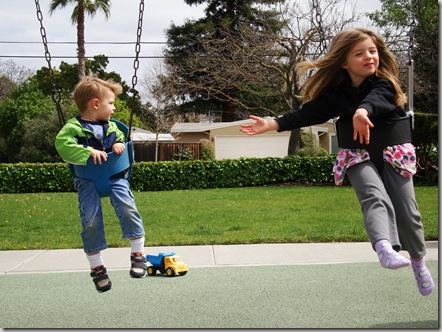 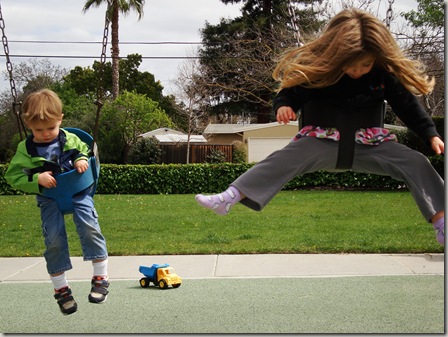 I know, I know, you’re looking at the pictures and saying “Um…so?” I’d just like to add that all of these pictures were taken while the kids were actually swinging on those swings. You can tell a little in the last picture, since Erin is a bit blurry. But to my eye I’d never have been able to guess that the kids were moving in the other pictures. I achieved a very fast shutter speed, even with a point-and-shoot camera, and I didn’t think I could do that with this thing.

A lot of shots are just impossible for me to accomplish with my camera. But I like that I’m striking things off that list as I discover the new things I can do, if I just know how my camera works. Until I took those pictures, I always thought that to take an action shot with my camera I was doomed to some grainy nightmare that wasn’t worth taking in the first place, even though it wasn’t blurry. Now I know better.

I’ve heard before from people that you should just always leave your flash on. Part of the reason, I’m sure, is that they can tell the pictures just look better when you do that. Without knowing why the pictures look better though, I’ve often left the flash on and ended up with things looking too bright. It took knowing a little (a very little) about the nature of cameras in general, and even more about my own camera in particular (that I can trick it into doing things automatically that it won’t allow me to do manually) to achieve some deliberately good pictures. Well, good for me, anyway.

I can’t tell if this is going to help me put off buying a fancy new camera for longer, since I know I can get some decent shots now if I take some time to think shots through, or if it’s all part of a snowballing addiction to getting better and better shots that will impel me into a camera store in the near future, blowing the kids’ college savings on a lens as long as a baseball bat.

See you in another thousand.

7 thoughts on “Four Pictures are Worth Another Thousand Pictures”