I drive the vehicle with the car seats. With one kid still in diapers, and the other still a bit….reckless….about how she deals with consumables, the vehicle can end up with a scent that, I believe, can take on a life of its own and follow us around  after we’ve exited the car. Car seat covers are a pain in the ass to remove, so washing them isn’t exactly a occurrence for us. The cheerios that end up ground into the carpet mix with crime-scene spatters of milk and juice to form a living organism. Having worked in car washes for years, and dealing with some pretty funky cars in that time, I am ashamed that mine is anywhere near the funky end of the spectrum, but it is. I just don’t take care of it well enough.

One day, just when I was thinking “If I don’t detail the interior of this car somebody is going to asphyxiate in here,” I checked the mail. There, waiting for me like a promise of a magical cave of wonder and joy, and joyness, was Febreze’s new “Sport” line. It has “Sweat Tech”, whatever that means. 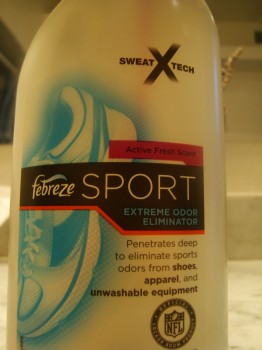 I was sent a free sample of this wondrous product-of-tomorrow, and the timing of its arrival was perfect. I brought it directly from the mailbox to the car, turned the nozzle to the “Destroyer of Backpacking Dad’s Car Odor” setting, and pulled the trigger.

Suddenly, my vehicle no longer smelled like the morning after a toddler bender.

I brought the bottle home with me and decided to try it out on the two worst offenders in the house: my slippers, and an old army kit bag I borrowed from my dad in 1996, which he had had in storage since the early 80’s.

The slippers? Well, I’ll let the pictures tell the story. 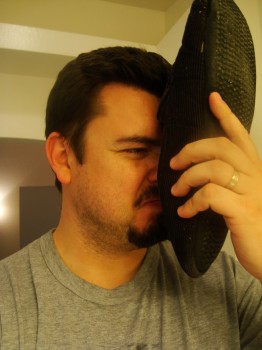 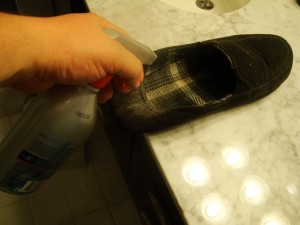 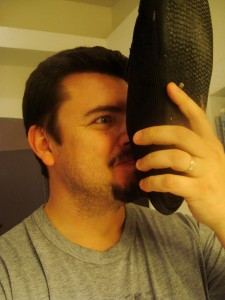 Yeah, that’s right. The combination of Febreze and slipper gave me the “crazy eyes”.

As for the old army kit bag: I sprayed it down… 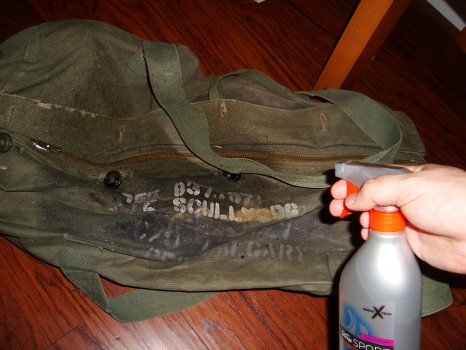 …and it totally failed to turn into anything other than an old army kit bag. It still smelled like my basement in the 80’s.

The vehicle transformation lasted about two days, I think. Then I took the car in for a detail. Really, if the car ends up smelling bad enough that I feel like I should keep a bottle of Febreze in the trunk, I’m not cleaning it enough. For stuff around the house, well, it’s Febreze. What the hell else is there to say? It kind of makes things smell nice. Emily likes the Sport line better than the more flowery lines, so I guess that’s a win.

I don’t like the thought of the things in the house being so dirty that they need a little freshening with something like this. But we have kids, and a cat, and me, so unless I’m going to spend my days bleaching the world, a little supplementing isn’t a bad thing.

We’ve purchased Febreze products in the past, so I guess I’d say we are more likely to re-purchase this line than the others.

1 thought on “Backpacking Dad’s Overdue Reviews: Does it smell funny in here?”