I sport the Mighty Goatee. I’ve done so off and on since May of 1996, which means I’ve had basically the same look for 15 years. For most of that time I’ve kept my beard and moustache trimmed with a comb and a pair of scissors. I tend not to spend much time on it, now. I think after 15 years I’ve developed some basic competence with a pair of scissors around my own face. But I have had accidents, and I’ve ended up with some pretty uneven results that make me want to either stay inside for a week or shave the whole thing off. I used to toy around with a small beard and moustache trimmer, with removal plastic guards and blades so dull they wouldn’t cut atmosphere, and I got so annoyed with the process that I sent it to the back of the closet for years. I resigned myself to using scissors and a comb for the rest of the Mighty Goatee’s life.

However, I was invited to review the Con-Air iStubble electric razor. While talking to my PR contact I expressed some doubts about the appropriateness of the product for me, goatee-wearer that I am. I don’t want stubble. I don’t like stubble. I don’t look good with stubble. In fact, I think most guys look stupid with stubble unless it’s honestly acquired. Manicured stubble is a disgrace. I was assured that the iStubble would, in fact, be able to trim the Mighty Goatee, leaving it long enough to be a goatee and not stubble. So, I agreed to review it.

Unlike my previous encounters with an electric beard and moustache trimmer, the iStubble has a powered guard: You set the length of the hair you want to leave behind in millimeters using a digital interface, and then the iStubble adjusts the guard itself. The most annoying part of my last trimmer was the removable guard that kept falling off, or sitting strangely. In that respect, at least, the iStubble is a definite improvement.

It has a wider blade than the last trimmer I had as well, so I felt like I was actually accomplishing something on each pass instead of feeling like I was going over the same patch of hair over and over again .

It is supposed to run on a battery, as well as plugged in to the wall outlet. I followed the charging instructions contained in the manual and attempted to use the iStubble with the battery alone, but it slowed down on me after 45 seconds, and then threatened to quit entirely. I plugged it in and it worked fine, but I don’t like being tethered to the wall.

I also don’t like the length range of the guard very much. It only extends to 5 mm, and that’s just a shade too short for the way I like my whiskers. It’s long enough to still call what you are left with “facial hair”, but I just didn’t look exactly like myself after I’d used it.

The powered guard is removable, giving  you access to the un-guarded cutting edge for edging. I used this for my moustache trimming, since I don’t need every follicle there to be the same length, just to stop at the same line in their approach toward my lip. However, not really internalizing what it would mean to have a wide cutting surface, I ended up trimming off too much at the outer edges of my moustache. That is going to take practice, and it’s the one time I can think of that I’d wished I was using my old trimmer, with it’s all-but-useless, narrow head.

The iStubble is clearly designed for someone other than myself, and if I hadn’t received mine for free I doubt I would have gone out to buy one. I’ve been trimming with scissors for so long it’s second-nature, and it just would never have occurred to me to buy something just for the sake of trimming my goatee; it’s too much of a unitasker.

It looks cool, though. 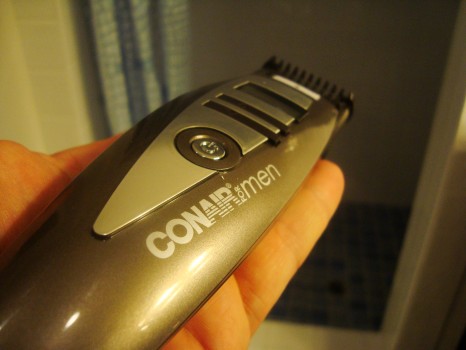