I am not great at staying in touch with my parents. I know they’re around, and I call them when I’m supposed to. But Emily often taunts me for being a bad son because I rarely ever just call when it’s not somebody’s birthday or Father’s Day or something. Even worse, given little innovations like VOIP and video-streaming, the kids don’t really get a chance to talk to grandma and grandpa all that often, and they only rarely see images, moving or otherwise, of each other. I’m living in the future, dammit! This is totally unacceptable.

It ought to be even easier, now, to stay in touch with distant family members. Sure, my parents live on the other side of the continent, but distance is meaningless here in the future. I ought to be able to turn on the TV and not just see what is happening in Washington on the Senate floor, but what is happening at my dad’s house. I miss my dad, and I should be better about calling him. More importantly, though, I should be better about letting him see the kids. Also, he plays the banjo, and that definitely needs to be shared with the kids. 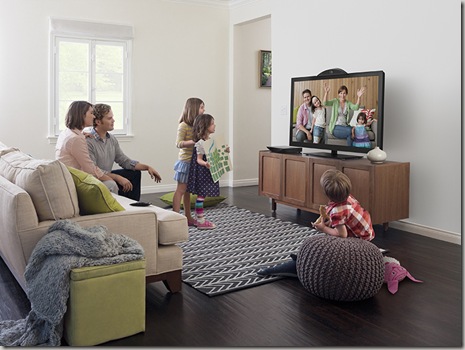 It’s a set-top box with an HD camera that both broadcasts your voice and image to another box over the, what’s it called, In-ter-net, and lets you see and hear what’s going on in front of the camera hooked up to the other box. Instead of running a webcam conversation and broadcasting it to a small laptop screen or an immobile desktop screen, the ūmi displays images on your HDTV screen. Dad in HD! See every grey hair in his ears! Let him see that spot on your son’s shirt that you are telling people is jam but which is probably snot! 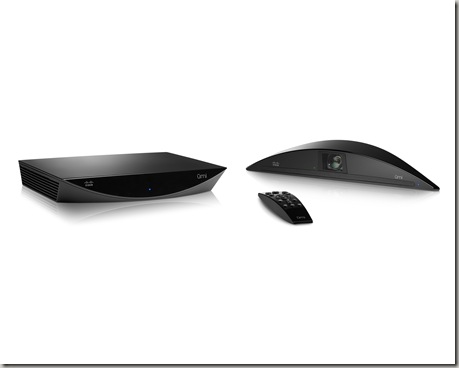 Even cooler? You can leave video messages for each other, since the ūmi has its own hard drive to store them. Record a video and send it to dad without having to upload it to a third-party service and then send him a link and set the right permissions? Yes. Yes, I would like to do that. Let’s just have him turn his TV on. 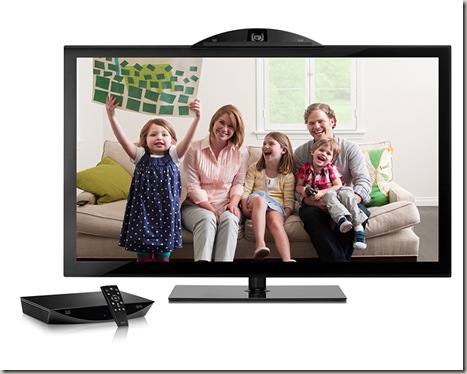 Right now Cisco is running a Buy One Get One Free promotion until June 19, 2011, and that means you can get one for you and Dad for Father’s Day. If you’re a bad son, like I am, you’ll have to find ever-more-clever ways of not talking. When you can basically just start a face-to-face conversation with him by turning on the TV, you might as well have never moved out of his house. Don’t let him talk you into mowing his lawn.

The coolest part about all of this is that Cisco wants to give someone a pair of ūmi boxes. TWO of them. You can win TWO of the things., and a year of service. That’s over $800 worth of stuff. That’s gameshow-level winnings. Sure, you could just go out and buy two for the price of one right now, but why not enter this giveaway while you’re here?

I’m calling this one the “Backpacking Dad’s What Was On His Sweater-Vest Giveaway”.

Here at Backpacking Dad we have some rules for giveaways.

Rule #1: In order to enter, leave a comment below with your answer to the following question: WHEN I WAS SIX YEARS OLD, I HAD A SWEATER-VEST. WHAT WAS WRITTEN ON MY SWEATER-VEST?

Rule #2: You may enter only one guess. However, you can earn extra entries in the following way: Tell your friends to leave a guess, and to do so as a REPLY to YOUR comment (and it helps if they also mention, overtly, that you sent them). Their guess will be assigned the next number in the count, but you will be awarded an extra entry, numbered immediately after theirs. The more people you get to submit a guess, the more entries you will get.

Rule #5: What was the point of all that guessing? Ah yes. Well, if you were here for Backpacking Dad’s Mystery Prize Giveaway, then you’ll recall that the person who guessed correctly what was in the bag “won” my promoting their favourite charity here on the blog, on Facebook, and on Twitter. I will do so again! If you guess correctly what was on my sweater-vest, I will promote your charity of choice with a blog post here on Backpacking Dad and also annoy people on Twitter (http://twitter.com/backpackingdad) and on Facebook (http://facebook.com/backpackingdadblog) on your behalf. This is my favourite part of doing giveaways, I think, so I hope it motivates you to enter.

Rule #6: I think you have to have a U.S. address to have the prize shipped to you (if you win the ūmi, that is; if you guess the sweater-vest text you don’t even need to have an address and I’ll still promote your cause).

So, that’s it. Enter away! I look forward to reading your guesses, and I can’t wait to give someone hundreds of dollars in prizes. That blows my mind. I feel like Bob Barker.

(This post has, of course, been sponsored by Cisco and their ūmi technology. This is not a review of the ūmi. I’ve never held one in my hands so I have no objective opinions to share about it.)

(This giveaway has ended and a winner has been selected.)

48 thoughts on “Give Dad a Face Call From the Future for Father’s Day: Win over $800 in Cisco ūmi Products!”