So, with a total of 44 individual entries, and 5 extra entries for referrals, I used Random.org to select a winning number for the “Backpacking Dad’s What Was On His Sweater-Vest” giveaway from a 1-49 range. Random.org told me…

Counting backwards and forwards through the entries, I see that “46” is none other than Christina McMenemy from A Mommy Story!! Congratulations Christina. Use your prize wisely and in good health, and remember not to leave it broadcasting while you are just walking around the house.

Now, in sadder news, not one person guessed what was on my sweater-vest. I know. I can’t believe it. What was on it, you ask? Well, let me show you. Here is an artist’s rendering of me in my sweater-vest when I was six years old. 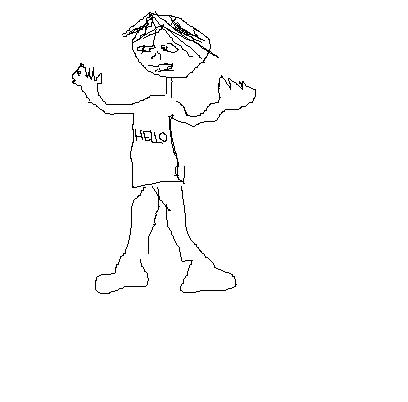 That’s a horrifying image and I apologize for your nightmares. However, my sweater-vest just said “HELLO”. That was it. Nothing fancy. I thought I was going to have to do at least ten different charity posts. Nope. I don’t have to do any.

Aw man, but that’s no fun. So, I’ll tell you what. I’m going to pick my favourite guess, and the person responsible for that will be the one who gets to name the charity. Cool? Cool.

Weirdly, I had two separate guesses of “Izod”. I would pick both of these as winners, but I don’t know what the hell that means. I think this means I’m lame in some important way.  I have to go with KBestOliver’s “Not the Mama” guess, both for referencing the best running gag on “Dinosaurs”, and for thinking that 6 year-old me was a time traveler who went into the future to steal a sweater-vest from someone. Or for thinking that I’m younger than I am.

Once again, congratulations to Christina. And to KBestOliver: pick your poison. Although don’t actually pick “poison”, because that sounds like the worst charity ever. Although maybe you meant “Poison”, like there’s some non-profit that helps support former Poison band members. If that’s the case, then okay.