It’s been about a year since I started following the slow-carb diet in Tim Ferriss’ The 4-Hour Body. Although I haven’t supplemented the diet with the drugs, workouts, or ice baths, that Ferriss talks about in the book, I’ve been diligent about the foods to avoid, and I’ve seen results: 20 lbs over a year, without adding any exercise to my routine.

It’s not magic. I lost the majority of that during the first few months, and I’ve basically just been keeping weight off for the rest of the time. Even without weight loss, though, the body re-shaping has proceeded; I’ve continued to lose inches of fat, slowly, but consistently.

At the one-year mark I decided to add in regular exercise to see what would happen (though not the workouts from the book). Having figured out how to be committed to something like a diet for a year, it has been fairly easy to commit to an exercise routine. Again, it’s not magic; more like inertia. I figured out how to forget to stop.

The hardest part hasn’t been cravings, or finding things to eat when we’re out (I’ve just gotten really, really good at cobbling meals together at restaurants); the hardest part is that I often cook two separate meals for dinner. One meal is whatever I’m going to be eating, which has at times been as simple as eggs, with spinach and a can of beans; the other meal is for Emily and the kids, and might contain interesting things like rice or potatoes. Often, I’ll cook a protein for both groups, and a vegetable side, and just substitute beans or lentils for whatever starchy, carby thing they’re going to eat. Sometimes it’s been hard to miss out on old dishes I used to eat, and I’ve been looking for substitutes. Spaghetti squash, for instance, though not a real substitute for spaghetti, can give you something to twirl on a fork with a spaghetti sauce.

I’ve also noticed that lentils can be cooked, flavoured, and mashed down to a consistency and density that isn’t too far off from mashed potatoes, so tonight I thought I would try doing a shepherd’s pie with a mashed lentil substitution. I’ve been wondering for a while if this could work.

I cooked potatoes for Emily and the kids, and lentils for me (in a chicken stock, with butter) and then browned some onions, and cooked some carrots, celery, ground turkey, and peas together in a single pot. I layered the turkey mix in two separate casserole dishes, then mashed the potatoes and lentils. The lentils needed a little more chicken stock added after cooking to make the mash really effective (and some salt and pepper to taste), but in the end the lentil layer worked great. 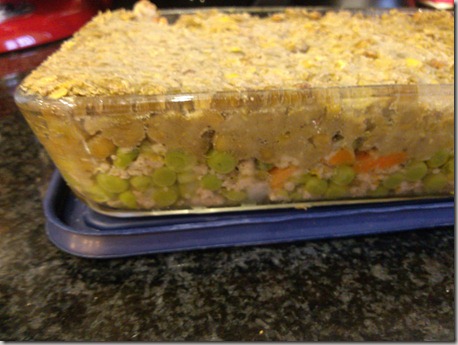 I covered the casseroles with foil, then baked them in the oven at 350 for about twenty minutes. The lentils even bound together, and to the turkey mixture, in the same way the potatoes did. I was very, very pleased with the result.

(Okay, so it’s not shepherd’s pie. In fact, as soon as I didn’t use lamb it wasn’t going to be shepherd’s pie. I don’t know what a person who raises turkeys is called, but it was a slow-carb version of a That-Person Pie.)

I have no reason to stop eating the way I do (a recent physical basically said I was fine, though I should exercise more, which I’m doing), and I have a new experiment going on (the exercise routines), and I’d like to see where it all ends up. Maybe someday I’ll fit into the suit I wore to my high school graduation. 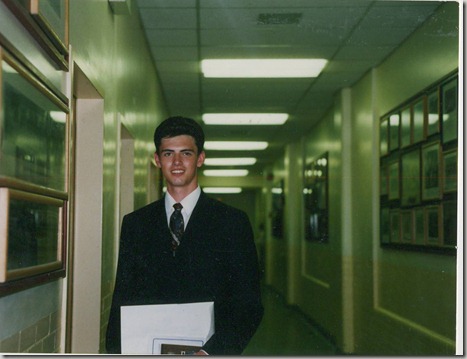 (This picture makes me laugh, because clearly I ate that guy. And he was all ears and Adam’s apple.)

6 thoughts on “Shepherd’s Pie, With Substitutions (A Weight Loss Tale)”