I spent my late 20’s putting on weight. I topped out, I think, at 245 lbs in early 2007, just before Erin was born. Being skinny as a kid, and all through high school (Thank you, smoking…), it bothered me a lot to see what I’d grown into. So, when Erin was born I decided I was going to get skinny again.

I had no idea how to go about it, but I went with the “Eat nothing; exercise constantly” method. I had a couple of pieces of fruit for breakfast, some raw beans for lunch, and something for dinner that would keep my total caloric intake for the day around 1000 kcal. Then I biked everywhere. I went on two- and three-hour long bike rides every few days.

Did it work? Well, of course it worked. I dropped 10 lbs every month for three months as I kept up this pretty consistent starve-pedal model. I started in June of 2007, and by Halloween I was 199 lbs. I saw the other side of 200 for the first time since my wedding. I was happy. I was starving, but I was happy.

A bruised heel acquired through bad shoes, fencing, and walking everywhere for a few weeks during the fall ended my obsessive exercising. And, as effective as the Zero-Food diet was, I couldn’t keep it up indefinitely. I started gaining weight again about six months after I’d started losing it.

It crept back up slowly, and I tried to fend it off with gym memberships, the milk-salad diet, skipping two meals a day, eating earlier, eating later. None of it worked to really lose anything, and I kept gaining. Between January 2008 and January 2011 I went from 205 lbs to 240 lbs. In June 2011, four years after I’d resolved to drop the weight, I was 242 lbs.

I decided to try again, and to try something like the opposite approach to the one that worked really well, really quickly, really briefly last time: I was going to do everything very, very slowly.

I heard Tim Ferris, author of The 4-Hour Body, on The Nerdist in early June as I was catching up to that podcast. Although I’d heard of the book, I mostly wrote it off as another fad diet. And maybe it is. But one thing Ferris said in the interview that stuck with me was that something as simple as having 30 g of protein in the morning, preferably within 30 minutes of waking up, could have an effect on weight, no matter what else your diet consisted of.

I tried it. Starting in June, I had a protein shake every morning, within 30 minutes of waking up, and ate whatever the hell I wanted for the rest of the day. I told myself that I would do this for 10 weeks, with no other difference in my life, and if I could do that, and it worked, then I’d buy Tim’s book and find out what else he had to say.

Over the next ten weeks I wobbled all over the scale, in part because of summer trips and rich vacation foods, but by the end of the 10 weeks I was down 5 lbs. I wasn’t eating any less (in fact, I had been eating a lot more over the summer), but I’d lost a little weight.

So in early September I bought The 4-Hour Body and read the weight loss sections of the book (there are other parts of Ferris’ total life philosophy in there, but I skipped them), then started on his slow-carb (not no-carb), cheat day, no fruit, no dairy diet.

I bought a counter-top griddle, and every morning I’ve had an omelet or three egss. I buy the big box of baby spinach at the grocery store, and add spinach to the omelets. I buy lots of beans. I make grilled chicken, steak, roast pork…I’ve had to come up with some creative ways to get through lunch, since it’s the least prepared meal in my repertoire, but I’ve been consistent: protein, some kind of vegetable, some kind of legume.

One tip Tim has is, if you are hungry late at night, instead of snacking on something terrible like chips or crackers, get used to just having a tablespoon of almond butter. I don’t like almond butter, so I substituted peanut butter for that. But when I bought the giant jar of Jif and opened it to take a spoonful, I noticed that it actually had added sugar. All peanut butter has sugar, I guess, but the organic, peanuts-and-salt-only stuff doesn’t have any added. I had to go buy a jar of organic peanut butter.

And then I had to stick it in the fridge. Now I’m peanut-butter-in-the-fridge guy. Dammit.

But, I’m also this, after a month of this diet: 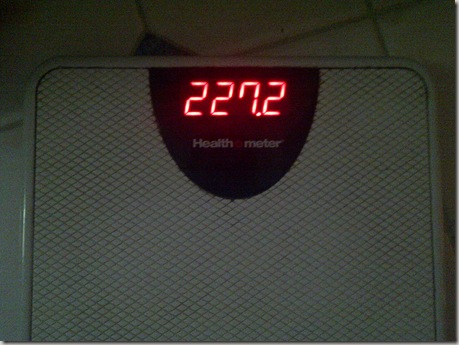 I’m down 10 lbs in one month, with no exercise at all except for some squats and inclined chest presses on Cheat Day (Cheat Day is also the most awesome thing I’ve ever seen). And I’m never, ever hungry.

I don’t know what will happen if I look down in three or four months and I see that I’m back down to 199. Will I stop? Will I consider the diet a success, but a tool, and go back to eating like everybody else does? I don’t know.

I do know this: I’m going to give the diet part of this program ten weeks, just like I did the protein shake part. After ten weeks, I’ll add in the limited exercise Ferris talks about in his book, and I’ll just see what happens. This is a long, slow, process, and I’m okay with that.

(Editor’s Note: This post is not sponsored. I left out links to the book on purpose because I didn’t want it to look like I was shilling. Buy the book, or don’t; I’m not selling it, or the diet here. I just wanted to brag for a minute.)

20 thoughts on “Peanut Butter in the Fridge: How I Lost 10 lbs Last Month Without Exercise”