I don’t think I’ve made a secret of the various geeky enterprises I enjoy supporting with my social media capital (and occasionally with actual capital). In case you haven’t been paying attention, though, let me introduce you to some wonderfully geeky monkeys on my back. 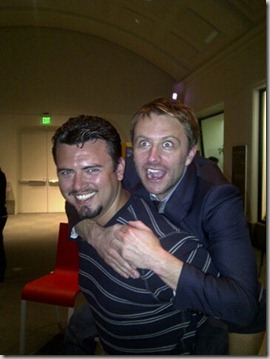 The Nerdist, Chris Hardwick. This is just what he does.

First, there’s the Nerdist podcast and YouTube Channel. I started listening to the podcast early last year, and I’ve attended two live recordings, one with Veronica Belmont, the other with Dan Harmon (this episode has never been released for some reason). The YouTube Channel includes a show called “All Star Celebrity Bowling”, which pits Nerdist teams against teams of people involved with various shows or projects, like Mad Men, Breaking Bad, Doctor Who, and The Walking Dead. Do you want to see Matt Smith or Jon Hamm bowl? Yes you do.

Second, there’s GeekNation, a website enterprise started by Clare Kramer and friends. Clare might be more familiar to you as Glory, the Big Bad from the fifth season of Buffy, or as Courtney from Bring It On, and she has many connections to the geek universe that make her site a draw. GeekNation features a number of podcast and video shows, and articles of a geeky bent. Say “geek” again, me. Geek.

Speaking of geek. the third timesuck to mention is Geek and Sundry, a YouTube channel started by another Buffy alum, Felicia Day. I’ve been a fan of Geek and Sundry since the channel started, as has been well, nay, exhaustively documented here, and I continue to follow shows like Written By a Kid, The Guild and Tabletop, among others.

More importantly, Tabletop inspired me to create my own YouTube sensation.

I call it “Tablepop”, because I think I’m funny.