This is Part 2 in a series of stories (and tips) from our most recent road trip. Read Part 1, on the Calico Ghost Town, here, and Part 2, on Las Vegas, here.

We left the Las Vegas Strip just after lunch, and started making our way out of town. Before we had hit the city limit, though, Erin asked us to stop for an emergency bathroom break. We took an exit, drove into a gas station next to an In n’ Out, and I ran into the convenience store with Erin in tow only to be faced with an “Out of Order” sign on the bathroom.

We ran out of the store, and high-tailed it across the parking lot to the In n’ Out. And there, just to highlight the difference between California and Nevada for me, a man stood at the counter, ordering his Double-Double, with his pistol worn openly on his belt. That’s just a thing that’s going to happen, apparently.

TRAVELING WITH KIDS TIP #7: When you are on an interstate road trip, you will have lots of opportunities to not only talk about the things the kids see, but what makes the state you’re in different from, or similar to, your own state. When you are brushing up on the places you want to see on your trip, don’t forget to learn something about the more general history, geography, or culture of the state so you have something to share even when you aren’t looking straight at a landmark.

We finished our business at the In n’ Out, and returned to the gas station where Emily and Adrian had remained behind with the car. We saddled up, and took off on the 93 out of Nevada.

Our route took us past Hoover Dam, but for some reason we didn’t take a look as we were driving by. We kept on going, out of Boulder City, and into the Lake Mead Recreation Area on the Arizona side of the Colorado River. Suddenly, we were in a desert.

As we drove on and on, toward Kingman, we noticed something: we were low on gas. We were very low on gas. Somehow we had forgotten to fill up in Vegas before leaving the city, and we hadn’t even checked on the whole drive out of the state. Maybe it was the emergency stop at the gas station/In n’ Out that made us feel like we had filled up. Whatever the reason, we had no gas. The gas light was on.

I looked on my phone for nearby gas stations, and saw that there was one up ahead, about 40 miles. It was probably too far. I started having very panicked daydreams about running out of gas on the side of the road in the desert, and walking for miles to get to a station. Would I leave Emily and the kids with the car, where there would be shade, or bring them with me? How far could I walk on the water I had with me? Should I go onward, even deeper into Arizona, or turn back to Boulder City?

Thankfully, my daydreaming was interrupted by the appearance of a highway sign, promising gas at the next exit, one of the Lake Mead Recreation Area exits, Willow Beach Road. We took the exit and started driving along, looking for the gas station. We drove, and drove, and drove, deeper and deeper into the canyon the Colorado River cuts into the ground. I was holding out hope that there was a gas station at a ranger station nearby, but as we drove on I was despaired. The gas light wasn’t getting any less on, and the longer we drove down into the canyon, the more gas we wasted, and the more likely it seemed to us that we were going to get stuck. But now, instead of being stuck on the side of a major highway in the desert, we were going to be stuck on the side of a road to nowhere. 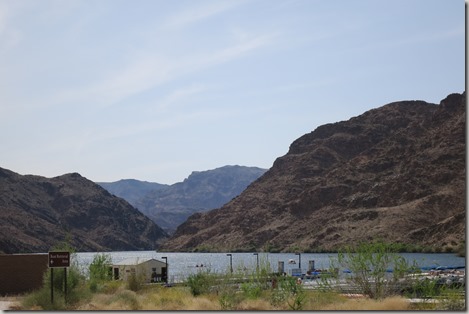 We saw the lonely, lone, gas pump off to the side of the road, and pulled around to it, relieved, disaster averted. 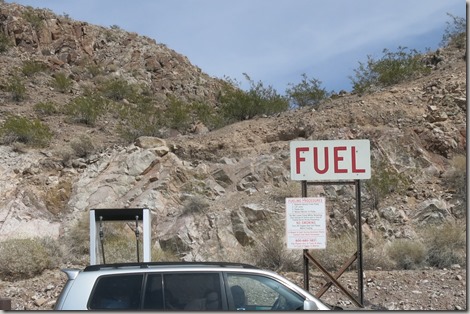 That was about the most adventure I can handle on a vacation. We drove back out of the canyon, up to the 93, and continued on to Kingman.

Things got a little boring. So here’s a picture of Emily eating a cracker.

And here’s one of Erin passed out in the back seat, holding on to her giant stuffed pig. 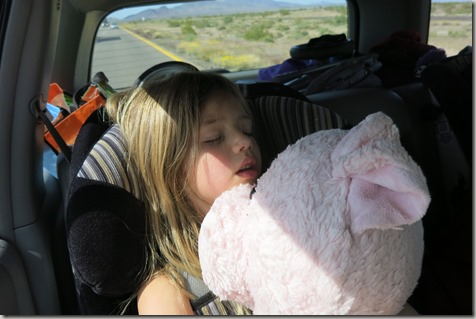 TRAVELING WITH KIDS TIP #8: Always keep some blankets within easy reach from the front seat. Even if it’s not cold, blankets are still useful for keeping the sun off the kids if you don’t have tinting, or a sunshade. Just remember to drape the kid, not the window. You don’t want to impair visibility while you’re driving.

Kingman, Arizona is where the 93 joins I-40, but it’s also where you switch over to Route 66 if you want to relive a bit of history. Route 66 loops north, through small towns like Peach Springs (one of the inspirations for Radiator Springs in Cars, and the main town on the Hualapai reservation), and eventually rejoins I-40 in Seligman. We weren’t sure how much extra time the loop would take (despite Sally’s lament that Radiator Springs was bypassed to save ten minutes of driving), so we stayed on I-40. But we did stop in Seligman to go to the Historic Route 66 General Store. 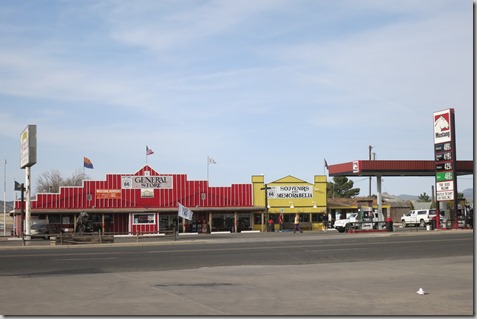 This place was pretty interesting. Apart from all the souvenirs, it also had more general merchandise (hence “general store”), and in the back corner, it had this thing. 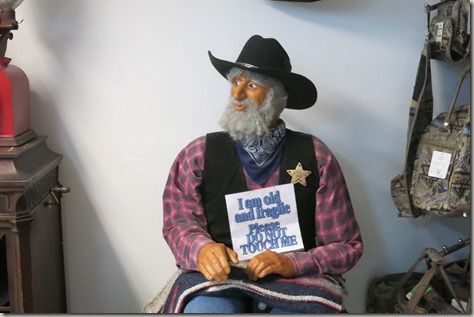 When you got close to the sheriff there, he would launch into some audio-animatronic performance. It was very old-timey. It was also a little racist. During one of his speeches, he mentioned his “friend” in the other corner of the store, who doesn’t say much. 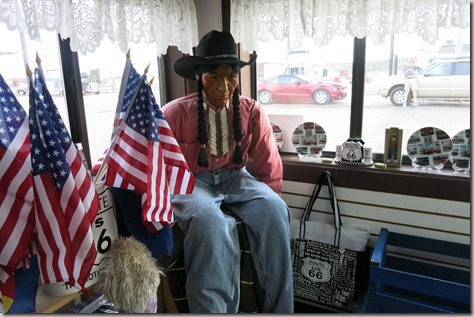 The sheriff warned us, jovially, to watch out for our scalps. Hilarity.

We bought some souvenirs, and the kids wanted deer jerky so we bought them some deer jerky, then we sat on the wagon wheel benches out front to take some pictures. 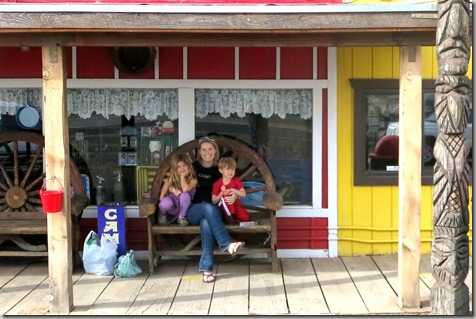 The remainder of our drive into Flagstaff was fairly uneventful. We saw lots of hills, then lots of trees, then a sign saying we were something like 7000 ft above sea level (we hadn’t even noticed the climb), then some signs for a place called “Bearizona”, which I appreciated because puns are always welcome.

When we got to Flagstaff, we checked in to our hotel room, then went looking for some place to eat. We went downtown, then walked around for a while looking at stores and restaurants, pondering our options. Finally, Emily had an epiphany and we went into the Grand Canyon tours office, which was still open, and asked the woman at the desk for a restaurant recommendation. She said that a place called Bigfoot Bar-B-Q was good, and great for kids because you could throw peanut shells on the floor.

It actually took some searching to find Bigfoot Bar-B-Q. It’s in a store, in the basement of a shopping gallery, and there’s no signage that we could see on the outside of the building that would suggest it was there at all. When I say it’s in a store, I mean it. On one side of a fence enclosure are some picnic tables, on the other side are women’s shirts on clothing racks.

They definitely had peanuts, and the kids totally loved throwing peanut shells on the floor. 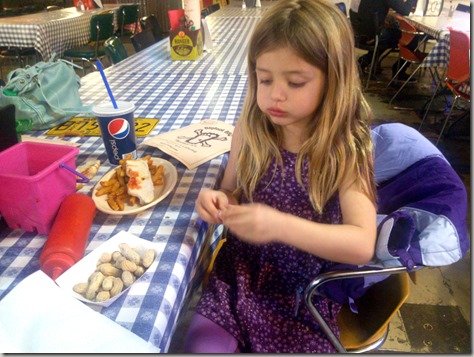 They also had giant slabs of ribs. (Not pictured: my salad. I swear to you, I ate a salad.) 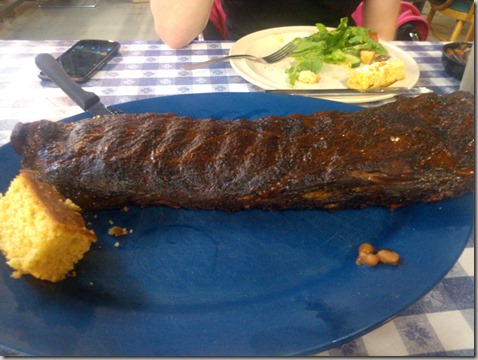 The best part, though, or at least the part the will stick out in our minds forevermore, was the baby cage.

Yes. The baby cage. It was just a play-pen area, with a TV tuned to Disney Jr. and some toys scattered about on a play mat. It was ten minutes of eating alone with Emily.

We returned to the hotel and passed out, eventually. We had to get to sleep, because the next day we set out for the Grand Canyon.